Our Island past and present

Home » Our Island past and present

Our Cracked Mug Guesthouse is proud to sit in Studley Field 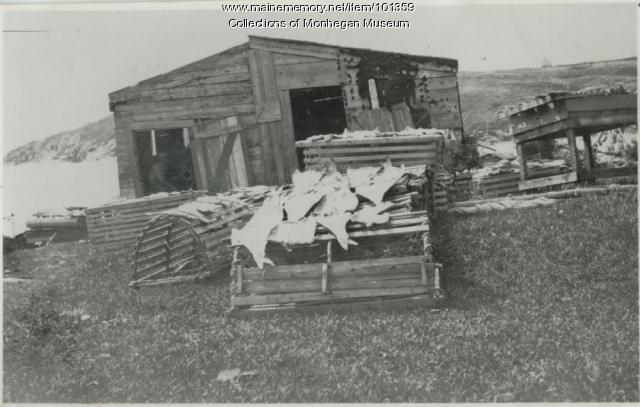 Fish houses were built during the 1800’s to support the island’s cod fishing industry, and heavily salted cod fish were spread on lobster traps to “cure” in the sun. Cured fish was sold at markets in Portland, or stored to eat in the winter.

William Studley built a fish house in 1845, and Andrew Peterson used it as a fish market in the early 1900s. By 1930 the building had fallen into disrepair and the owner had it torn down.

The Cracked Mug sits today in what is locally known as “Studley Field”.

Some believe the Vikings visited the area around 1,000 A.D. and left carvings on the rocks of nearby Manana Island.

But for sure,  the island was long used by local Indians who gave it its name, Monchiggon, an  Algonquian word for “out-to-sea island.”

In the late 1400s, Gaspar Cortereal of Spain  took island Indians to sell as slaves.    Early European explorers from Cabot to Champlain explored the island and claimed it for their countries.

Then Captain John Smith, six years before the Pilgrims landed at Plymouth, established Monhegan  as a prominent fishing station.  During that time, as the explorer charted the surrounding waters from Maine to Cape Cod, he gave the region a name: New England.  A marker was placed by the schoolhouse during the 400th anniversary to mark this historic moment.

For many voyagers coming across the Atlantic, Monhegan was the first sight of land. By the early 1800s, trade in the area was increasing. In 1822, Congress and President James Monroe authorized the building of a lighthouse on one of Monhegan’s highest points for $3,000. The light went into operation two years later. The first lighthouse was a 30-foot conical stone tower. Thomas B. Seavey, the first keeper, remained at Monhegan for 10 years.

After much damage from storms, the lighthouse was rebuilt in 1850. The 48-foot granite tower built that year still stands. 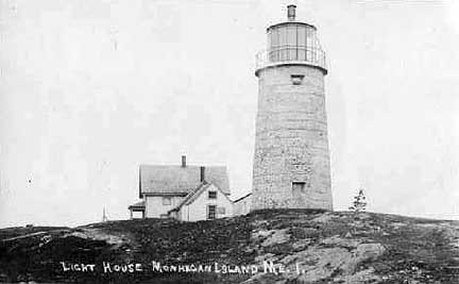 At  night the island went early to its slumbers, and only the lighthouse on the hill kept watch. It dazzled the eyes if one looked up, and rendered the darkness more profound.

On October 2, 1777, Henry Trefethren of Kittery, England, cabinet maker, bought the islands of Monhegan with next-door Manana, and this deed to Trefethren (or Trefethen, as the name was afterwards written) began the first page of the history of the present settlement.

His son Henry in turn divided the island between himself and brother-in-laws Starling and Horn in the 1790s.  Henry took the northerly end of the island, Horn took the area extending from Deadman’s Cove, and Starling took a lot that includes what is known today as Cathedral Woods, White Head, and the Meadow.

By the 1820’s they had built homes on the island.  Starling’s homesite is now the Island Inn.

Starling died December 20, 1832.   A revolutionary soldier, his grave is on the slope of the lighthouse hill.

Henry Trefethren, before he died on February 28,1838, sold his old dwelling-house to William Studley.

I’ve been told that at least 4 locals on the island today can directly trace their roots for 9 generations to these first families.

A Tale of Two Taxes

Maine became its own state in 1820 when it seceded from Massachusetts.  In the division of lands and islands that followed, Mohegan was awarded to Massachusetts* despite its location 12 miles off the Maine coast.

In fact, according to a 9th generation Monhegan son, property tax during this time had to be paid to both MA and ME.

*according to The Maine Historical Magazine 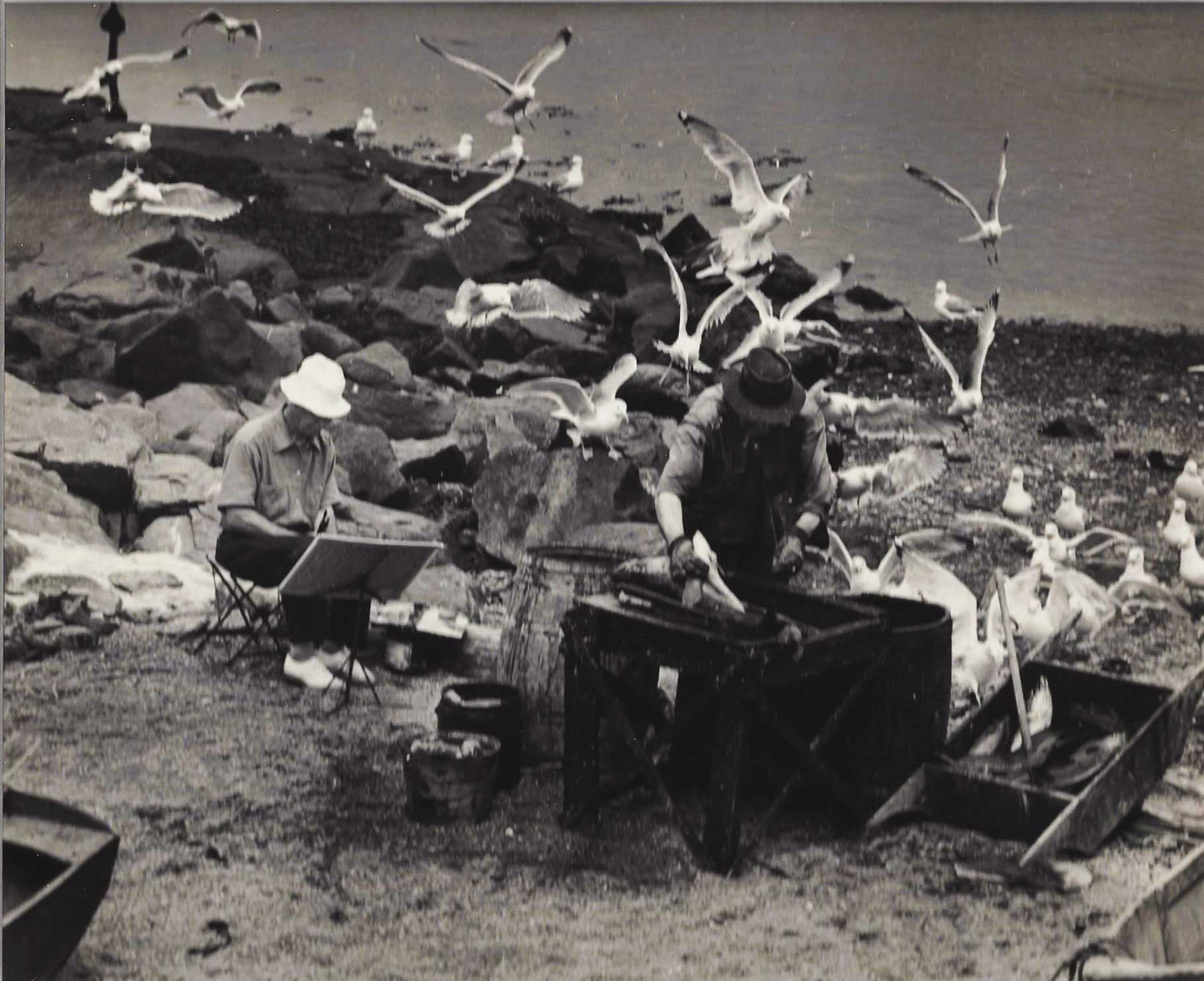 Today Monhegan’s colony of summer artists has roots that go back to the mid-19th century, and two of the early artists in residence were William Henry Singer (1868–1943) and Martin Borgord (1869–1935).

Since that time, Monhegan’s artists have created a visual history of the island, documenting what it looked like and who was here from that late 18th century time, until now.  Alice Kent Stoddard, for example, painted a lot of portraits—the lightkeeper, the fishermen, island children. They’ve become a record of who was here in the 1930s.

James Browning Wyeth starting coming to Monhegan for the summers of the late 1950s on vacation with his father Andrew. They sketched together, and some of Jamie’s early Monhegan paintings– a bronze bell in particular– became some of his best-known work.

Whether you’re an artist, or an art-lover, you may enjoy an art walk around the island.

You’ll get to see some of the island’s iconic landscapes, such as White Head (Maine’s highest cliff), Burnt Head, and Gull Rock – nooks and crannies where artists have set up their easels for 150 years.  You’ll also visit village sites including artist residences.

The Cracked Mug is collaborating with local artists to create a consignment wall in the guesthouse, and in the future, we hope to host artists’ talks and workshops — all with the aim of helping guests to come to know, and then appreciate and love, the rich art culture of the island. 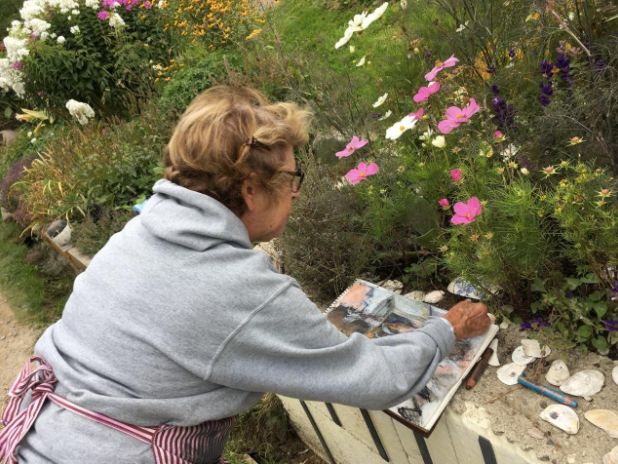 Theodore Edison, son of inventor Thomas Edison, was a frequent visitor to the island. Edison loved the island’s wilderness and in 1938, concerned over potential development, began purchasing property as it became available. In 1954, he formed Monhegan Associates, one of the first land trusts on the East Coast. Today, nearly three-quarters of the island is under conservation easement.

“At least as long ago as 1908 I started spending summers on Monhegan as a child, and I and other members of my family have fond memories of Monhegan as it was “in the old days.” The beauty and freedom with which I was then surrounded probably had much to do with making me want to help in saving enough samples of wilderness on Monhegan and elsewhere to permit future generations to enjoy what I had known.Back in 1929, long before there was any thought of creating an organization like Monhegan Associates, Inc., I bought a strip of land that runs across the island (next to the old Underhill property) from the main road to Burnt Head on the north end to Gull Rock on the south. In 1946, I inherited from my aunt, Mary Miller Nichols, an adjoining strip that includes the middle portion of Gull Rock; and later I acquired most of the rest of the wildlands at the southerly end of Monhegan, extending all the way to Lobster Cove. I still own these lands; but I have no intention of developing them, and under my present will they would go to Monhegan Associates, Inc. upon my death. “

A one-hour boat ride from Midcoast Maine transports you to the island of fairies. 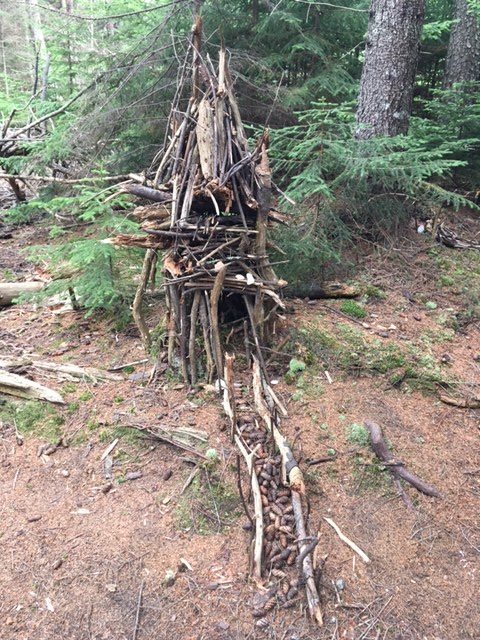 They inhabit the heart of Monhegan Island, in a deep grove of pointed firs that locals call the Cathedral Woods. Generations of summer children have snuck away into this deeply shaded grove. Within the tangled roots of magnificent spruce truces, they lay miniature pinecones for fairy walkways.  Arrange petite fallen boughs for a porch roof, crack tiny twigs to create ladders up to lofts where blue and purple stream pebbles become miniscule furniture – all for the fairies, of course.

For a 7-year-old, Monhegan is a world of fanciful imaginative barefoot living.

You’re an adult, though, and have other ideas…

And Walkers take their daily sojourn on Trail 1, a 3-hour trek around the ring trail that scrambles over boulders, steps along 100’ cliffs where seals frolic below, passes the steel skeleton of the DT Sheridan shipwreck in Lobster Cove, and breezes along the flat rocky beaches of the north end.

As you return to town, the 4:30 ferry is departing and you see the “jumpers” ready to plunge into the icy water, the traditional island farewell when your loved one leaves for the summer.

End of day is marked by the clang of the farm bell. This century-old method summons everyone to dinner.  Lobster traps have been emptied onto tables spread with corn and slaw and greens straight from the picket-fenced garden.  The Trailing Yew’s legendary chocolate cake is served on its lawn overlooking the small harbor and down at the Fish House, Fish Hash cakes and bottles of wine are strewn around picnic tables on the beach.  Lobsters are steaming in our outdoor kitchen at 5 Church Lane.

But whether you’re on the deck of the Cracked Mug, or strolling with a dripping chunky pistachio cone along one of the sand roads, all generations gather for the closing of day on the western edge.

Monhegan sunsets seem to linger. The sky and water ripple in pink and peach until the entire sea shimmers in gold against a deep lavender horizon. A boatman rows his dory across this golden pool, back to the village wharf. Your day on Monhegan is done.